Clwstwr Co-Investigator, Professor Richard Sambrook of Cardiff University's School of Journalism, Media and Culture, on disruptive technology and what it means for the future of news.

The arrival of any new disruptive technology raises both excitement and fear. Excitement  for the potential of what it might offer; fear for the loss of jobs and loss of control.

That’s certainly true of Artificial Intelligence as it applies to journalism. As yet, AI has largely been deployed to undertake the simpler, routine and easily templated newsroom roles – sports results, stock movements, anything that is data led and uncontested.

But as a new report from the London School of Economics (LSE) makes clear, it has the potential to transform newsrooms, the consumer experience and the economics of journalism.

The report, produced with support from Google’s Digital News Innovation Fund, makes clear that AI is a significant part of many newsrooms already, but with that comes editorial and ethical responsibilities which are still being worked out.

It highlights many areas where AI is currently deployed:

There are plenty more examples. The LSE report (video) finds three key motives for organisations to deploy AI – editorial efficiency, relevance, commercial efficiency – and three areas where it is being deployed: Newsgathering, News Production and News Distribution, the three core areas of the news value chain.

But investment can be expensive – and smaller organisations are struggling to keep up. And it is clear that training, education and media literacy around AI varies widely. The potential for AI to reshape journalism – an activity described as “in crisis” as often as it is described as “essential to functioning democracies” – comes through this detailed, well researched report clearly. But most newsrooms still lack a coherent strategy for developing and adopting AI. 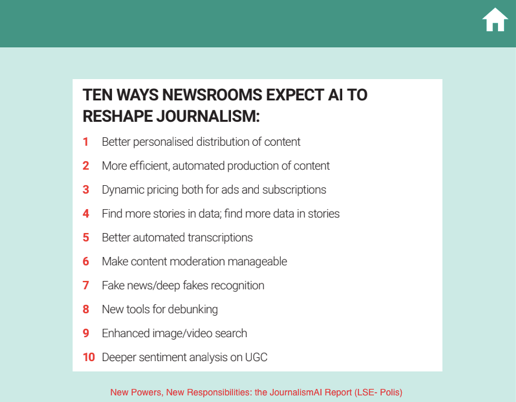 The challenge, of course, is whether it will live up to this potential. The track record of new technologies coming into news production is not good on that score.

When social media arrived 15 years ago it was hailed as a means of getting closer to audiences and the public, of better informing journalism, of expanding the range of sources. A cynic might say it has largely become social marketing.

So the challenge for AI will be two fold.

First, to invest and train to maximise its potential, moving beyond automated data to deep search, new services, better customisation.

Secondly to ensure these benefits are seen through, and the business efficiency doesn’t trump the editorial and relevance opportunities.

And it is unlikely robots will put journalists entirely out of work. But their roles will change and that may raise a further challenge. As human roles are needed to design, train, update, validate, supervise or manage systems, it’s important they don’t become the cogs in the machine.